Light is the robe you are wearing. 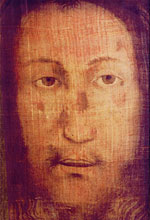 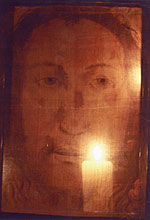 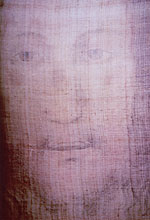 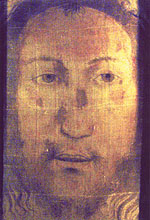 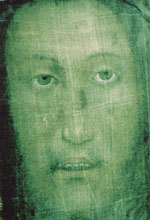 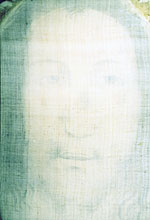 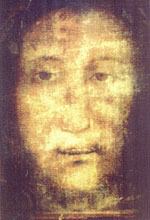 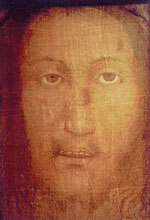 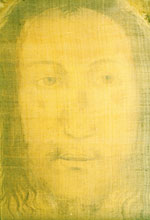 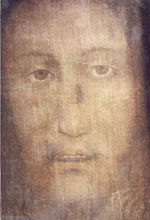 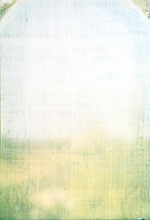 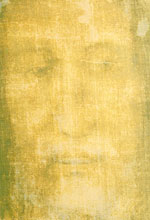 Almond-shaped eyes, curved eyebrows, a long, narrow nose, the slightly opened mouth – this is the face revealed to viewers of the veil – a symmetrical face, framed by long hair and a thin beard, crowned by a short shock of hair. Closer inspection reveals a swelling of the right cheek and an injury to the nose.

The wounds that can be localized based on the traces of blood on the shroud of Turin look as though they were scabbed over. The shadow below the mouth indicates the slackening of the facial features in death. However, not only the mouth is open, but the lips are as well, as if they are uttering a letter, an “A” as in “abba” – the Aramaic word for “father”.

Due to the properties of the substrate, a fine, transparent woven fabric measuring 24 x 17.5 cm², the motif appears to change with the lighting and perspective. Sometimes one pupil appears larger than the other, as if it had lost the ability to adapt to varying brightness due to the effect of a blow. The visible accumulation of fluid below the iris also supports this. 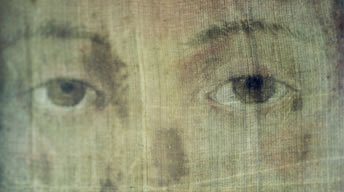 Sometimes the eyes even appear to change their direction of gaze.

Amazingly, the motif is visible from both sides, but looks different on each side. Seen from the altar, Jesus appears as the smiling victor over death.

As with the shroud of Turin, no colored pigments or other deposits have been found on the veil. Despite this, the colors of the veil range from shades of brown to slate gray to golden yellow, depending on the lighting conditions. The pink hue on the forehead conveys the impression of someone who has just been resuscitated. In bright light the veil turns white, and the image can no longer be seen. Like the colors of the rainbow and butterfly wings, the colors on the veil of Veronica are made visible via light refraction and the superimposition of light waves.