“They that sow in tears shall reap in joy. He that goes forth and weeps, bearing precious seed, shall doubtless come again with rejoicing, bringing his sheaves – manipulos – with him.”

The town of Manoppello is nestled in the hills at the foot of the Majella massif in the Italian region of Abruzzo. This remote village is home to an invaluable relic: a veil which bears the image of the face of Jesus Christ.

For nearly 400 years this “sudarium” (Latin for “sweat cloth”) has afforded consolation and hope only to a small number of the faithful, while it remained largely concealed from the rest of Christendom. In the meantime, indications have been accumulating that this is the “true image” which should actually be in St. Peter’s Basilica in Rome.

Concealed, mysterious, unveiled – Even the nature of the cloth hints at its enigmatic, mystical character: a transparent veil on which the image of Jesus appears to be in constant transformation depending on the varying lighting conditions. The full effect of its richness is apparent only during the processions in daylight. Renowned artists have attempted to recreate this motif, but even state-of-the-art photographic techniques have been unable to capture the shimmering countenance adequately. Furthermore, the veil is made of a very special material: byssus, the legendary fabric of antiquity, a material for eternity, which has survived 2000 years since the death of Jesus. The question of how the face of Jesus could appear on the sudarium was one which occupied the early Christians - a question which poses riddles today.

Manoppello, manipulus, maniple – the name of the seemingly obscure small town which has provided sanctuary for the veil of Veronica for centuries, could not be more significant: the name “Manoppello” is derived from the Latin word “manipulus”, a “handful”, which is shown on the town’s coat of arms as a “handful of sheaves”. The wheat sheaves recall bread, as does Bethlehem, the birthplace of Christ: its name means “house of bread” in Hebrew. “They that sow in tears shall reap in joy. He that goes forth and weeps, bearing precious seed, shall doubtless come again with rejoicing, bringing his sheaves – manipulos – with him.” (Psalms 126:5-6) – this is the psalm referred to by the priest when donning the maniple, originally a sweat cloth, which was later used during Mass to cover the left hand when passing the chalice, ciborium and empty monstrance. Thus, the name of the town Manoppello, which was founded long before the arrival of the veil, contains more than merely a reference to the sweat cloth itself. In conjunction with the bread and the liturgical object, it doubly underscores the meaning of the Eucharist:

“And he took bread, gave thanks, broke the bread and gave it to them, saying, ‘This is my body, which will be given up for you. Do this in memory of me.’ Likewise, after the meal he took the cup, saying, ‘This cup is the new covenant in my blood, which is shed for you.’” (Luke 22:19-20)

Thus, as Father Ignazio Scurti, a Capuchin monk from Manoppello, emphasized, “The true Veronica, the true veil, is the Eucharistic host, and you will find the true face of God in the face of your neighbor.” 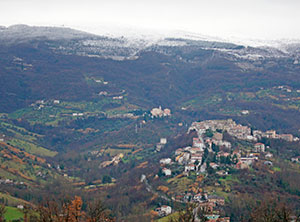 Manoppello is a somewhat remote town in the Italian region of Abruzzo. 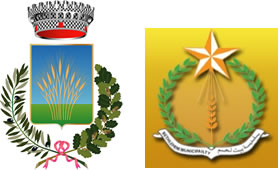 The coats of arms of Manoppello and Bethlehem 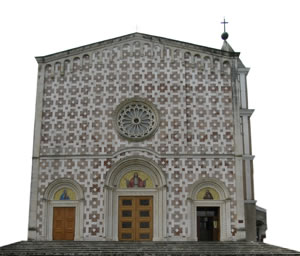 The papal Basilica of the Holy Face in Manoppello