The burial cloths of Christ

The sudarium of Oviedo, the holy coif of Cahors, the shroud of Turin, the napkins of Kornelimuenster – a noteworthy number of textile relics are connected with the burial of Jesus. In his Easter Gospel, John mentions a bundled (or folded – the Greek word “entylisso” is used) sudarium in addition to multiple linen cloths:

In ancient times, the use of multiple cloths was common in Jewish burials. The narrative of the resurrection of Lazarus also mentions winding cloths and a napkin:

“The man who had died came out, his hands and feet bound with linen strips, and his face wrapped with a cloth.” (John 11:44)

As was customary even in ancient Egypt, the face of the dead person was covered with a transparent veil made of byssus, so that it remained visible during the funeral. However, due to the heavy bleeding, the byssus cloth could not be placed over Jesus’ face initially in accordance with tradition, as it did not absorb any fluid.

The shroud of Turin and the sudarium of Oviedo (northern Spain) have undergone extensive scientific research. The bloodstains on both cloths come from a dead male with type AB blood.

In Hebrew tradition, blood is holy, because it is considered the seat of life and as a form of atonement. When a person dies, all blood should be collected and buried together with the corpse. The blood cloth of Oviedo was thus placed over the head immediately after death and pressed in two layers onto the mouth and nose as His body was taken down from the cross. The outline of the hand that exerted the pressure is visible on the relic. Later, the holy coif, made of eight layers of gauze and preserved in Cahors, France, was pulled over His head and used to fix His lower jaw in place. Then the entire body was wrapped in the shroud of Turin.

“And when Joseph had taken the body, he wrapped it in a clean linen cloth.” (Matthew 27:59) Without a doubt, practicality was not the only criterion for the selection of graveclothes - their quality played a role as well in honoring the dead. This also applies to the huge burial cloth (roughly 6.5 x 3.5 meters) made of byssus and the richly ornamented burial cloth that are both preserved in Kornelimünster.

The three cloths that covered Jesus’ face represent the Sacred Triduum: the blood cloth of Oviedo represents the suffering and death of Jesus on Good Friday, the shroud of Turin the peace of the grave on Holy Saturday and the veil of Manoppello the moment of resurrection on Easter Sunday. 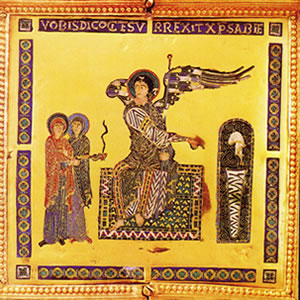 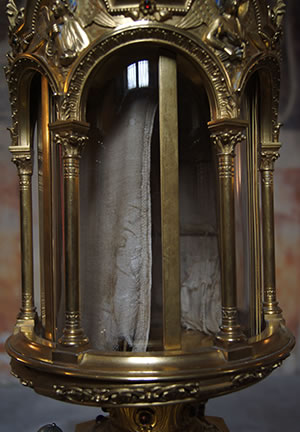 The Holy Coif of Cahors