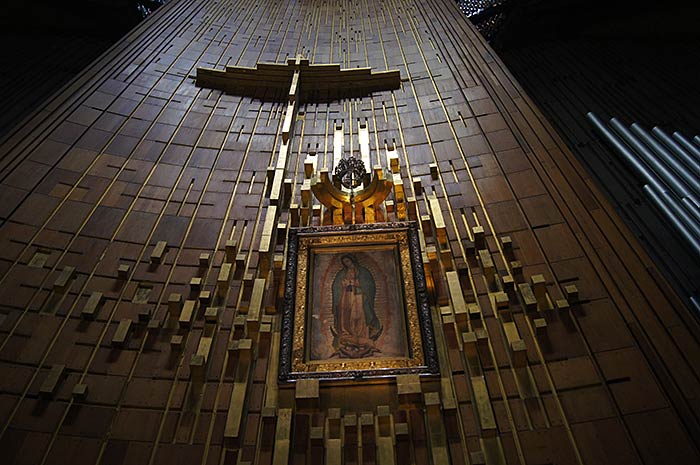 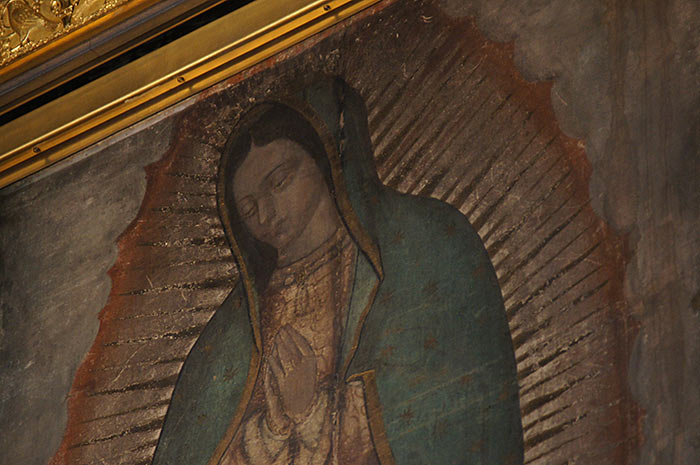 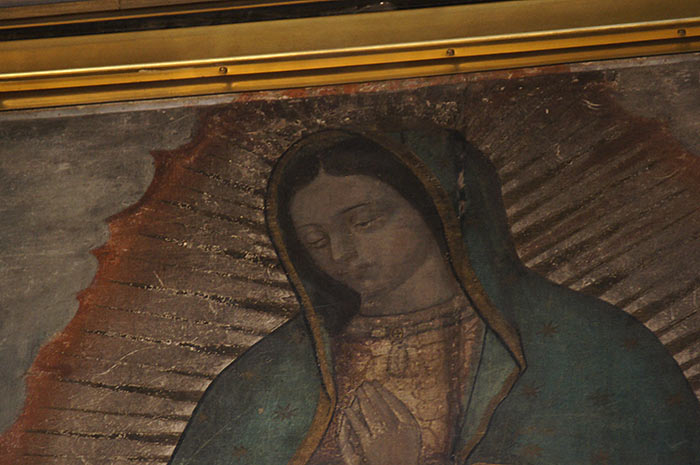 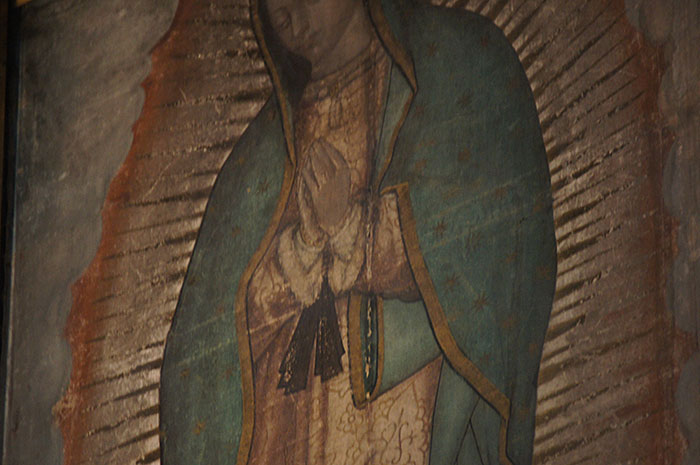 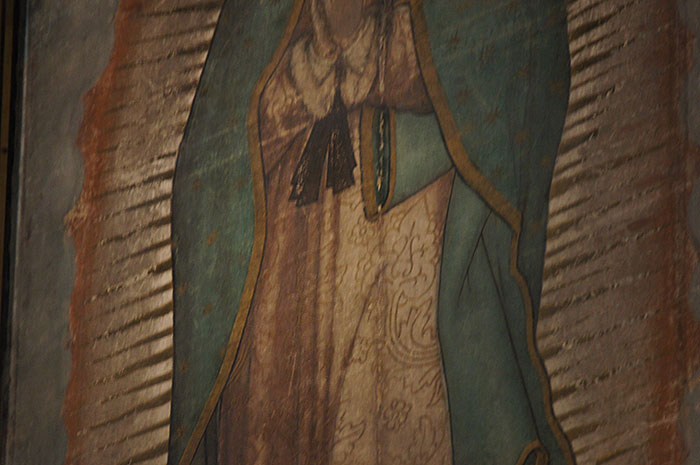 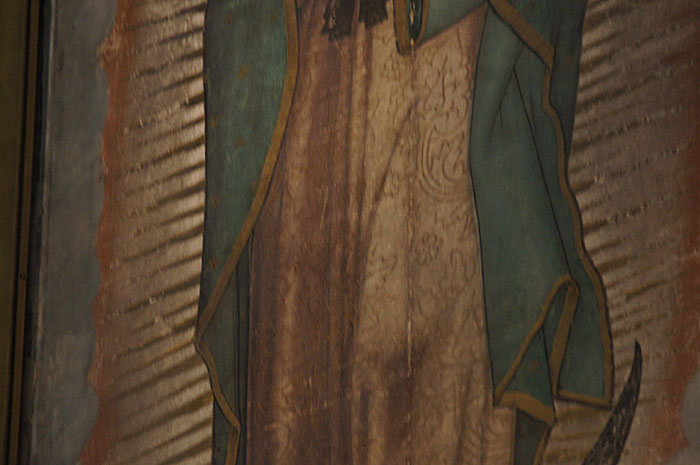 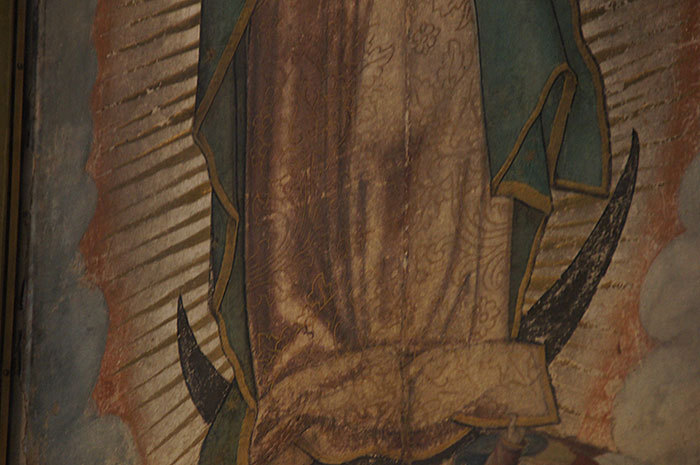 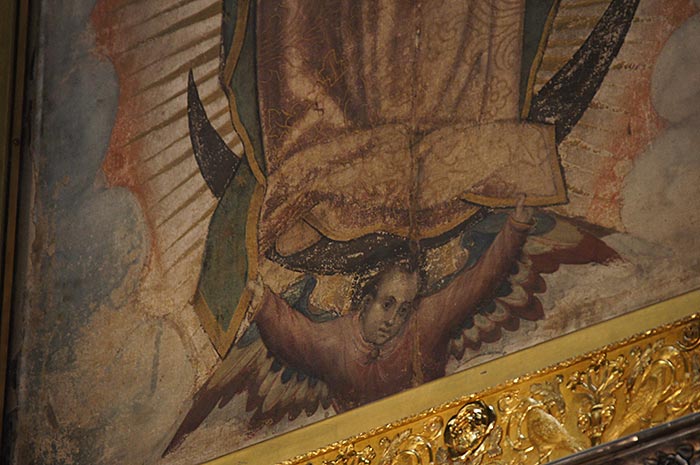 In the case of the sudarium and the shroud, no accessories distract attention from the image of the person, but the Virgin of Guadalupe is almost completely veiled except for her face and hands. In dense clouds, framed by the rays of the sun, she stands on a black crescent moon under which an angel is hovering. The portrait is rich in symbolism stemming from the Aztec pictographic script.

Her skin has a slight, dark tint and she is wearing her black hair loose – a sign of her pregnancy in Aztec imagery. Her folded hands, of different colors – the right hand lighter, the left darker – may represent the union of two peoples.

The numerous ornaments on the tunic relate to the earth and the high valley of Mexico as well as the history of the Aztecs. Under Mary’s folded hands, the black ties of a girdle are visible, which indicates pregnancy. The trapezoid-shaped ends promise a birth in the near future. At the site where the unborn child is resting in the mother’s womb, a four-petal jasmine bloom known as “Nahui Ollin” is depicted, representing the center of space and time and indicating the presence of the Aztec god of creation. This motif also plays a central role in the calendar stone of the Aztecs. Under strong magnification, the face of a waking infant can be seen in the flower.

Mary’s cloak has the blue-green color of the Aztec kings, a sign of divinity and the universe. It is adorned with 46 stars, which, viewed from above, reflect the night sky on December 12, 1531.

The time of creation of the image could not have been better chosen, as the winter solstice took place on the same day, which in the Aztec religion symbolized the birth of the new sun and the return of life. Halley’s comet reached its zenith, and during a conjunction of the sun and Venus, these two heavenly bodies passed close to each other in a pattern which occurs only every eight years. The Aztecs interpreted the phenomenon as the return of their god of creation, represented by Venus. On the miraculous image, the Virgin Mary announces her primacy over the sun god by covering the rising sun, whose rays surround her like a halo.

In the language of the indigenous inhabitants, “Mexico” means “center of the moon”. At the same time, the half-moon is the symbol for the feathered serpent god Quetzalcóatl. Thus the image of the Virgin Mary on a crescent moon simultaneously symbolizes the place and alludes to the inferiority of the Aztec god. The name “Guadalupe” possibly arose from a mis-hearing of “coatlaxopeuh”, meaning “one who vanquished the serpent”. Moreover, the moon was a symbol of fertility.

The angel with the eagle’s wings is generally identified as Juan Diego, whose name in his own language meant “one who speaks like an eagle”. With one hand on the Virgin’s cloak and one on the tunic, he represents the union of heaven and earth. It is suspected that the angel and several other elements of the image were added later. Spanish monks may have added to the image to bring it into line with their own ideas.

Based on the location and time of the apparition, her appearance and the symbols involved, the Virgin of Guadalupe embodies a fusion of the Aztec past and the Christian present, of the Old and the New Worlds. In the years following her apparition, millions of Aztecs who had previously refused to do so converted to Catholicism.