Innumerable stations of the Cross tell of the compassion of Veronica, who lent Jesus a cloth to wipe the sweat and blood off his face on his way to Golgotha – his likeness was imprinted on the cloth. In fact, this legend first arose in the 12th century. The name “Veronica” is made up of “vera”, the Latin word for “true” and “eikon”, the Greek word for “image” – the “true image”. An allegory which is probably based on the woman (Bernice) mentioned in the various gospels who was healed of her hemorrhages after she touched the robe of Jesus.

However, the knowledge of the existence of an image of Jesus Christ on a cloth was anchored in the collective memory much earlier:

According to various legends, King Abgar V of Edessa (4 BC - 7 AD and 13 - 50 AD) was supposed to have received a portrait of Christ from a messenger – possibly Jude Thaddeus, an apostle and cousin of Jesus. The king had requested an image in order to be healed from an illness. One report stated that the portrait was painted by an artist (around 400); another (between 609 and 726) describes how the portrait came into existence while drying on a cloth folded in quarters (tetrádiplon) after the artist was unable to depict Jesus. Four folds can also be seen on the cloth of Manoppello.

There are parallels between the legends surrounding King Abgar and an early version of the Veronica legend, in which Veronica asked Jesus for a likeness and effected the healing of Emperor Tiberius (42 BC - 37 AD).

The theme of the likeness developing through drying is also found in a legend which originated in Kamulia, near Edessa, between 284 and 305 during the period of persecution of the Christians as well as in the report from Memphis dating from the 6th century.

According to a legend which must have originated between 560 and 574, a heathen woman found the image of the Lord painted on canvas in a spring. When she took the cloth out of the water, it was not wet, which would have been the case for byssus, the material of which the cloth of Manoppello is made. She covered it with her coat, on which the image was reproduced. The existence of several cloths with the image of Christ was apparently common knowledge at that time. 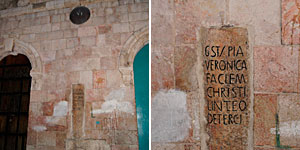 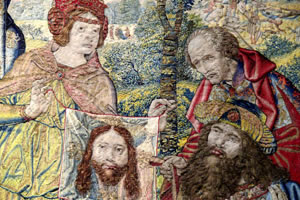 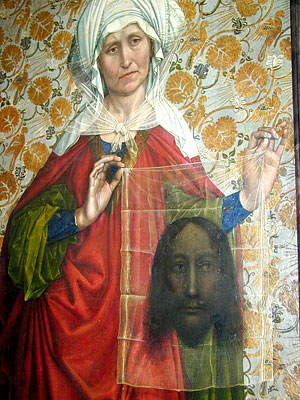 Sweat cloth of the Master of Flémalle, ca. 1430 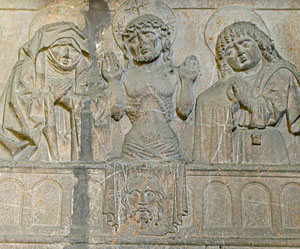