The veil is lifted

For the Eucharistic Congress in Pescara in 1977, the Capuchin friar Domenico da Cese, whose beatification process is currently underway, organized an exhibition with photos of the sudarium of Manoppello. The Italian journalist Renzo Allegri wrote an article about it at that time. In 1979, this article came to the attention of the Trappist nun Blandina Paschalis Schloemer, who recognized congruities of the facial features on the sudarium of Manoppello and on the shroud of Turin. The German pharmacist and icon painter used orientation points to develop a technique of superimposition. Based on the congruity, she was able to prove that the images on both cloths were of the same person. Sister Blandina has lived as a hermit in Manoppello since 2003.

She succeeded in whetting the interest of Dr. Heinrich Pfeiffer, S.J., professor of Christian art history at the Pontifical Gregorian University in Rome, who reached the conclusion that the cloth of Manoppello was actually the missing Veronica from the Vatican.

“Das wahre Gesicht Jesu” (The True Face of Christ) was the headline on September 23, 2004 in the German newspaper “Die Welt”, where the journalist Paul Badde made the results of his extensive research available to a wider audience for the first time.

Jesus is Truly God Among Us, “The Mediator and the Fullness of All Revelation”
General Audience Pope Benedict XVI gave in Paul VI Hall
Vatican City, January 16, 2013 (Zenit.org).

Superimposition of the sudarium of Manoppello on the shroud of Turin 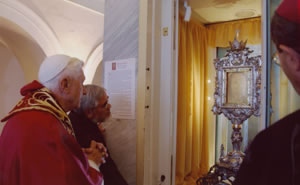 On September 1, 2006 Pope Benedict XVI visited the Veronica in Manoppello.