The theft of the veil of Veronica

A damaged Venetian frame and broken crystal – The frame in which the Veronica was kept between two panes of glass until the 17th century can be viewed in the treasure chamber of St. Peter’s Basilica. Its dimensions prove the point: a frame practically designed for the cloth of Manoppello, but not for the dark, opaque relic venerated as Veronica’s veil in the Vatican and shown close-up only to a few carefully selected souls.

The early modern period, which encompassed the Protestant Reformation and Counter-Reformation with their profound effects on society, convulsed by philosophical and religious wars, provides the historical context for the loss of the veil of Veronica.

On 18 April 1506, the cornerstone of St. Peter’s Basilica was laid. Today, it lies beneath the Pillar of St. Veronica, where the precious relic was to be safely preserved in a safe. The building of St. Peter’s Basilica was partially financed by the trade in indulgences, which led to Martin Luther developing his famed ninety-five theses and to the Reformation. According to the “Relatione historica”, a historical narrative by Donato da Bomba, Dr. Giacomo Antonio Leonelli received the image, known as the “Holy Face”, from a pilgrim in Manoppello in the same year that the cornerstone was laid for St. Peter’s Basilica.

During the Sack of Rome in 1527, mutinous troops under Charles III, Duke of Bourbon, and mercenaries plundered Rome, and various contemporary witnesses lamented the loss of the veil of Veronica as one of the consequences thereof. However, the Veronica was exhibited several times after that, up to the beginning of the 17th century, namely in 1533, 1550, 1575, 1580, and 1600.

In 1606, the reliquary was taken to the new St. Peter’s Basilica in Rome, and in 1608 the old oratory where it was previously housed was torn down. In a copy of the “Relatione historica” preserved in L’Aquila, there is an annotation in different handwriting alleging that in the same year the husband of Marzia Leonelli had stolen the holy image from the house of his father-in-law.

The work “Opusculum de Sacrosanto Veronicae Sudario” (Little Opus on the Most Holy Sweat Cloth of Veronica) by Jacopo Grimaldi, who undertook a detailed inventory of the treasures of the old St. Peter’s Basilica in 1618 (possibly post-dated by 2-3 years), shows the Holy Face with open eyes on the title page. On the true copy from 1635, a face with closed eyes is depicted, referencing the shroud of Turin as its template. Copying the veil of Veronica, which depicted the holy countenance with closed eyes, had been reserved to the canons of St. Peter’s Basilica since 1616. In 1628, after a unique “recall”, even copies made prior to that were destroyed.

In 1618 or 1620 - the two versions of the “Relatione historica” in L’Aquila and Manoppello differ in this detail - Donato Antonio de Fabritiis purchased the sweat cloth. Europe was on the brink of the Thirty Years’ War, in which the Italian duchies and the Holy See, although neglected in the history books, were involved from the very beginning. In 1620, after two years of construction, the Capuchin monastery in Manoppello was founded.

The date and circumstances of the veil’s disappearance from Rome and arrival in Manoppello remain unknown. With the multitudes of pilgrims in mind, the Vatican certainly had no desire to publicize the loss. An earlier date for the arrival of the veil of Veronica in Manoppello was most likely given in the “Relatione historica” to forestall demands for its return or destruction, among other reasons. The Capuchins, who as mendicant friars could travel through the countryside unmolested by robbers, may have brought it to Manoppello.

The monastery there was evidently built to receive the veil of Veronica, which was not yet in the possession of the monks at this point, according to the “Relatione historica”. The reredos of the formerly structurally identical cloister in Penne, preserved in its original form, is topped by a cross, while the reredos of Manoppello, which is now in the treasure chamber of the monastery, features the resurrected Christ. The former Veronica Chapel has been closed in the meantime, as space was needed for the pilgrim hostel. Today, only a dark glass window that permits no light to enter the church indicates a hollow chamber.

The veil of Veronica was apparently walled into a column that separates the choir from the sanctuary. Interestingly, there is a picture here that depicts the presentation of the Holy Face to the Capuchins. In 1686 it was placed in a tabernacle with three locks, which could be opened only when the mayor, the pastor of the parish of Manoppello and the guardian of the Capuchin order were all present with the respective keys. If the Capuchins’ claim to ownership had been incontestable, as the “Relatione historica” and the deed of donation seemed to indicate, it would not have been necessary to immure the veil of Veronica and the Capuchins would have had sole access rights.

In 1714 a frame was placed around the Holy Face, and it was given an altar in the former Chapel of the Blessed Virgin with an iron gate that could be raised and lowered. In 1718 Pope Clement XI granted pilgrims journeying to see the veil of Veronica a seven-year indulgence without asserting any claims to ownership on the part of the Vatican. Only in 1923 was the Holy Face given its current place on the main altar. 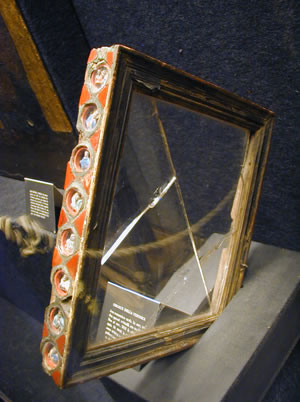 Empty frame of the Veronica with broken pane of rock crystal in the treasure chamber at St. Peter’s Basilica 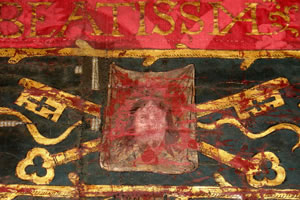 Rome, flag of the Swiss Guard dating from 1512 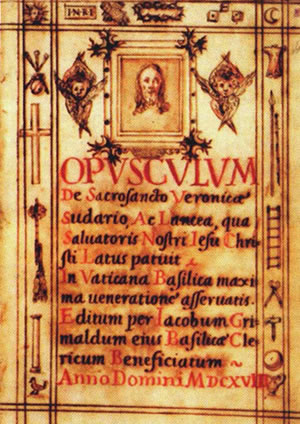 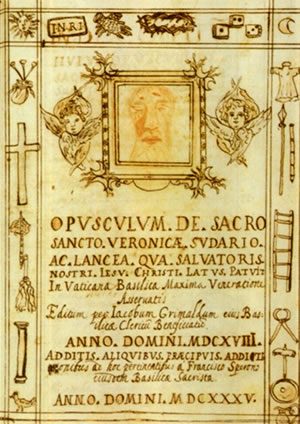 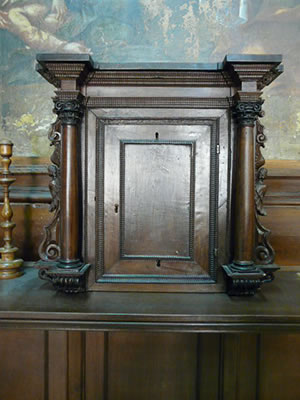 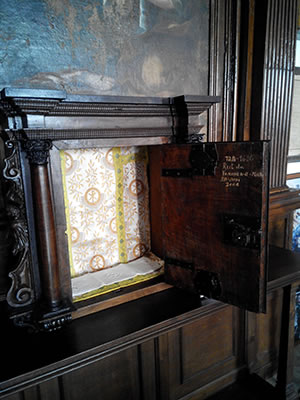